Before you read this post, check this out.  It’s short, I promise, and it’s brilliant.

I was thinking about this quote this weekend at a skating meet we attended a couple hours away.  As I sat in the lobby waiting less-than-patiently for my skaters’ turns, I realized that everywhere I looked I saw dresses I’d made…but they were on skaters I didn’t know or had never seen before.  At one point I counted nineteen dresses that I could see just from my perch in the glassed-in fishbowl where coaches and judges can safely escape the competition noise and drama (which is ironic, since there is always more noise and drama inside that room, but I guess it’s like changing your own baby’s diapers as opposed to someone else’s baby’s diapers…it just doesn’t seem so bad when it’s your own).

The number of dresses didn’t leave an impression on me, though; instead, what struck me was how much I still hated the oldest ones, which were now cherished by some new skater who doesn’t have a clue that what she sees as beautiful really falls in about the neanderthal stage of my costuming evolution (australopithecus, actually, but I’m trying to be kind).  I saw the dress I made when I first experimented with paint because the client didn’t want to buy as many stones as the dress actually needed, and it made me cringe; yet, this is the fourth skater I can recall wearing it, so to her, it must not be as bad as I think it is.  However, I also saw one of my favorite dresses on one of her teammates, shown below, and I love it today as much as I did back then.

I also recall one particular dress from about fifteen years ago that I was so, so excited about — until the skater put it on and we realized it looked more like Las Vegas lingerie than a skating dress (sorry Katey…you always ended up as the target of my failed visions, it seems).  It was disgusting, and it immediately went into my kids’ dress-up box, where it was (not surprisingly) never worn, even as a joke when my then-6-year-old son wanted to crack up his little brothers.  But the idea in my head was amazing, and it’s still there.  In fact, I think I’m going to recreate it this year, because I think (hope) I am finally skilled enough to pull it off, or at least to make it worthy of staying out of my kids’ Halloween Options stash.

After listening to Ira’s brief message for about the tenth time today, I understand that I did have a much different vision back then for Ugly Purple Dress, so it’s not ugly because I had no taste; it’s ugly because I had no skill.  If I redid that dress today, with the same drawings and the same picture in my head, it would turn out much, much different (at least it sure as hell better).

As Ira said, I do wish someone had told me twenty years ago that I would suck, and that it’s ok, because at least I had the good ideas in my head — better there than nowhere, I guess.  I never understood why I hated so many of the dresses I’ve made over the years, while clients were thrilled with the results.  I was told I was too much of a pessimist, a perfectionist, a whiny bitch (no, not joking), etc.  But really, I was just frustrated that, for some reason, what left my workshop didn’t match what was still in my head, and I didn’t understand why.  Now I do, and I guess I’m ok with it.

These days, more stuff leaves my workshop looking as I intended rather than just coming as close to what I want as I’m capable of producing, but that’s only because I didn’t give up and I kept churning out as many pieces as possible over the years…even when I swore I wasn’t going to make another one.  Each time, I think they come a little closer to what I have in my head, and today, garments sometimes even leave better than I envisioned.  I’m trying to forgive myself for things like Ugly Purple Dress, and remember that at least I had the idea and the taste to create it in my head — putting me way ahead of many others in this line of work, I hope.  At the very least, I’m trying to remind myself that this is the case; because as I learned watching the girls on Sunday, true beauty is in the eye of the wearer, not in whether or not it matches what was in the producer’s head, and that’s a good thing.

1 thought on “Saturday Sayings: When It’s OK to Stink” 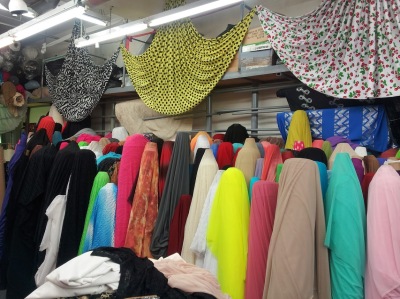 WE'RE BACK! It's been a brutal 6 months...brain surgery, radiation, chemo, you name it...it isn't over by a longshot, but I'm confident that I am HEALING and I can start sewing again! Thank you all for your wonderful and loving cards and messages -- YOU are who got us through the past 6 months. Now it's time to get busy sewing!
Www.rightminded.me
Status update: we are closed until further notice, due to a health condition that is unlikely to improve or be resolved.
I've been holding onto this piece of "chameleon" color changing fabric for a few years, waiting for just the right person. ❤ Outfits are starting to fly out of the studio...3 last week sent to VA, CA, and FL, 1 tomorrow to OH, 8 more next weekend for CA, 2 for my favorite Florida Girl @gabbisk8ergirl the end of next week! Right now we're only accepting waiting list applications, but after Memorial Day, if we can, we may be able to open a few more spots for Nationals. 👍🏻🥰
My FB sewing group is doing a "first and last" thing right now, so here's mine: Emma's first figure dress, on her 4th birthday, Memorial Day Weekend 2004, the day she turned 4. And the only fabric I have left, a 42"x24" piece that I'm turning into her last figure dress, which will be worn Memorial Day Weekend 2021, the day she turns 21. Wish me luck ❤ because there is going to be some mad Frankensteining at play.
Flashback to our most dramatic transformation, from beginning to end. Just wait til you see what she's wearing this year 😉