It’s been a while — thanks for sticking around…

(BTW, if you’re only interested in the mannequin tutorial, scroll down to where the photos begin!)

The skating world is so weird sometimes; I know people who protect their costume ideas for each season more carefully than they protect their passwords, bank PIN’s, and in some cases, their true ages. I’m always very secretive about costumes I’m working on whenever it’s requested by a client — this is why you won’t see photos of most costumes in progress, or photos of finished costumes until after they’ve been worn.  If I’m secretive about the dress I make my own daughter, it’s usually just because I’m not sure if I can actually do what I set out to do in the first place, so sharing details about her dress really doesn’t matter because what she ends up with is generally pretty far from what I originally planned anyway.

This year I’m going to try something totally different: I’ll document the entire process, beginning to end, because honestly this idea is so ridiculous that if someone else is crazy enough to want to copy it, more power to him or her.

Yep. This is why I’m not worried about this insane idea being copied.

The first step in the process was to figure out how to embroider non-stretchy ribbon onto a stretchy base fabric. Usually embroidery is done with a hoop that holds the fabric taught, so that the ribbons and thread don’t create bunching, pulling, and puffing. The problem with doing this on stretchy fabric is that the hoop would over-stretch the fabric in some parts, under-stretch it in others; this would leave bumps and gathers everywhere  when it’s worn, rendering the whole mess totally unwearable. I needed to figure out how to replicate the exact stretch of each part of the dress while it’s being embroidered, so that everything lays flat and nice when it’s being worn.

Since I couldn’t really ask Emma to wear the dress for what I’m estimating will be 200 hours while I embroider it on her actual body, I opted to recreate her so that I’d have a perfect form, a makeshift “hoop” if you will, on which to embroider these hundreds of flowers.

I’ve seen so many different methods of doing this, so after much research I decided my best bet was to use paper tape — the kind used for packaging, with a pre-gummed backing that is activated by water. Supposedly this method dried harder and stronger than using duct tape, so that’s how we began. Over the course of the next several hours, we learned many ways how not to create a personal mannequin, which I’ll go over below.

*Tape (more on this below)

*Sponge/water if you use water-activated packaging tape

*Tight fitting clothing that covers everywhere you want the tape to go;  clothing you don’t mind sacrificing, since it will be forever attached to the inside of your mannequin (as you can see in the photos below, I made her little spandex arm sleeves because the sleeves of her t-shirt weren’t long enough to cover her to the elbow)

*Hair dryer (if you’re using paper tape, you’ll need this to speed up the drying of each layer before adding a new one)

*Lots of stuffing materials (we used last year’s AP World History papers; you can use newspaper, scraps of fabric, really anything you have laying around)

A word about tape: in my photos, you’ll notice that I started with paper tape, but ended with duct tape. The edges and ends of the paper tape just didn’t seem to be laying flat enough for me. I wanted a smooth finish, but it looked like feathers on a bird, with all the ends sticking up a little bit. Maybe it was the quality of the tape I used, maybe it’s just the characteristic of paper tape, maybe it was just me…but in the end, I preferred duct tape. Nashua brand seemed to be just perfect for this; it didn’t fray, and it was easy to pull off the roll in one piece rather than having it split (which was the case when I moved onto my second half-roll of tape, which was a different brand).

FYI: Emma is a fairly small person, and we used 1/2 roll of paper tape (with a full roll being 114 meters) and a full roll of duct tape (well, two half-rolls). Had we done the entire thing in duct tape, I would have used 2 full rolls, so plan accordingly.

Have your model use the restroom. Be sure he or she is wearing underwear that you don’t mind ruining, just in case you accidentally cut through it. I was able to pretty easily slide the scissors between the clothing and the undies, but this might not be possible with every model, so it’s better to assume the underwear will be ruined and then be happy when it isn’t. Also, soft shoes (or flip flops) would have been nice. My model was barefoot, which grew sort of annoying after standing on the hard wood floor for a couple hours.

Cut pieces of tape ahead of time! I found that I liked shorter pieces of paper tape, if you choose to go that route.  I also found that cutting slits in the edges of a lot of pieces made them lay flatter (cut slits like you would on a curved sewing edge).

With your model in his/her tight-fitting clothing, start by wrapping a large X across the chest. If your mannequin will have a crotch and thighs (great for leotards and pinning on skating skirts, since most dressforms don’t have a crotch and instead stop just above the hip!), one long piece between the legs is a great way to start as well. I found that my model’s t-shirt was just way too big (but it was the only one she was willing to destroy), so it took quite a few foundation pieces of tape to get it to fit snugly. You want those clothes tight against the body, so be sure to wrap the tape so that there is no gap between the tape and the model.

Start adding pieces horizontally at first, and then vertically. Use those shorter pieces with the slits on the edges to fit curves (like bustline and shoulders, especially). If you´re using paper tape, be sure to let each layer dry before adding another (this is where the hair dryer comes in handy). 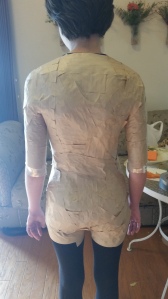 So I was having a hard time getting the paper tape to lay snug against her body — there seemed to be a bit of a gap, so I really wanted to cinch it in. Sitting on the table happened to be a roll of clear packing tape I’d just used to mail some things, so I figured it would work well to really gather in that excess tape and make the base of the mannequin really fit. Well, it DID do that…as you can see from the photos, it really drew the excess tape together and created a very nice silhouette that matched my model to a T. Great, right?

Wrong. DO NOT USE CLEAR PACKING TAPE. EVER. Paper tape won’t stick to clear packing tape, so everything started sliding around after that. What a mess! Skip the clear tape and go straight to…

DUCT TAPE TO THE RESCUE! 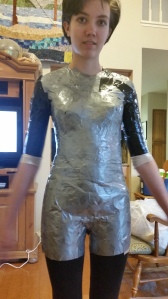 I was about to just give up on the whole damn thing when I decided to try to raid my husband´s work bench to see if he had any duct tape laying around. Of course he did, so I tried to salvage the mess of wet paper tape and packing tape by just wrapping her up in a few pieces of duct tape. It worked perfectly! So we finished by covering the entire paper tape base in duct tape.

A WORD ABOUT CROTCHES…

I hate mannequins without legs and a crotch, since most of what I do involves a leotard of some kind. This is where things get dicey, and it’s really important that you’re *ahem* close to the person you’re wrapping. I’ve seen a lot of duct tape mannequin tutorials, but only one bothered to go below the hip. If you’re going to go through the trouble of making this thing, go ahead and do it right — give yourself some legs!

When you’re convinced that your model is sufficiently wrapped (no clothing showing through, at least two layers of tape absolutely everywhere (three or four is better), it’s time to cut. You want to cut through BOTH the clothing and the duct tape — the clothing becomes part of the mannequin.  Take care around the underwear/bra areas, as it’s tricky to differentiate clothing you want to leave in the mannequin and clothing you want to leave on the model! I started at the back of one leg and sliced all the way up through the center of the back to the neckline. We also cut slits in each arm, about half-way up to the shoulder.

Have your model carefully wriggle his/her way out of the form, moving slowly so that the form doesn’t become misshapen.

Crumple up your paper and slowly start stuffing your mannequin, being sure to really fill it…if you leave large air holes or gaps, your mannequin will eventually cave in. We stuffed it pretty tightly so that when pressed, it barely gives beneath your hand.

In the end, I think we accidentally did this the perfect way: start with paper tape to give a strong, sturdy base, and then end with duct tape, to really make sure the fit is exact. Our mannequin’s measurements are EXACTLY my model’s measurements, except for a 1/8″ difference in the bustline (because my mannequin’s boobs turned out a little uneven…I don’t know why, but with only 1/8″ difference, I really don’t care. That’s close enough for me…I mean, 1/8″ can be the difference between Bra A padding and Bra B padding, so it’ll be fine). So I now have a mannequin I can stick pins into, leave around the house to spook the dog, or hey — use as a ribbon embroidery form.

Join 305 other followers
Follow Leave No Stone Unglued on WordPress.com

Favorites ❤❤❤❤
Usually dresses look better on a dressform, with special lighting, filters, etc...but this one for is so awesome in person and I can't wait for Miss Bella to wear it! Subtle airbrushing and cut stoned fringe, a twisted skirt (front cuts to the left on the front AND on the back), violet rivolis, mirrors mirrors everywhere...
Another men's figure top shipped! Up on deck next week: finishing four custom dresses, a dozen or so club outfits, a tux, and then it's prom season!
Try #4 blue ombre, coming up...
Modern swing for Miss Faith!
First dress-last dress, with the scraps I've saved. A very emotional nationals.